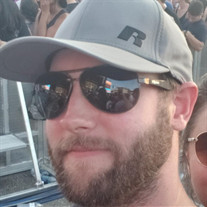 Stephen Louis Turner, 28, a resident of Perry, Florida, suddenly passed into eternal life on Tuesday, May 7, 2019, from injuries he received in an automobile accident. He was born in Tupelo, Mississippi on June 9, 1990, to Kenneth Owen Turner and Mary Ann Blom Turner. He was an assistant manager at Walmart on Thomasville Road and many would say the care he showed for his employees was like none they had seen before. His love for his children and family ran deep; there wasn't a day that went by where they were not at the forefront of his mind. He had a passion for music and it was easily heard in his voice as he sang every where he went. Anyone who knew Stephen knew he was full of life. He had a way about him that made everyone smile. In addition to his parents, he is survived by three children, Bradley, Grace and Brooklyn; his brother, Brandon Turner; fiancé, Lauren Arrowood; grandmother, Patsy Turner; as well as numerous aunts, uncles, cousins and friends. Stephen is preceded in death by his paternal grandfather, Buddy Turner; and maternal grandparents, Roger and Jonnie Blom. Funeral services will be at 11:00 AM, Saturday, May 18, 2019, at Abbey Funeral Home, with interment following at Tallahassee Memory Gardens. Visitation will be held an hour prior to the funeral service. The family has requested that in lieu of flowers, memorial donations be made to a GoFundMe account to help care for his children at GoFundMe.com/fundforstephenturnerschildren. Online condolences may be expressed at www.abbeyfh.com.

Stephen Louis Turner, 28, a resident of Perry, Florida, suddenly passed into eternal life on Tuesday, May 7, 2019, from injuries he received in an automobile accident. He was born in Tupelo, Mississippi on June 9, 1990, to Kenneth Owen Turner... View Obituary & Service Information

The family of Mr. Stephen Louis Turner created this Life Tributes page to make it easy to share your memories.

Send flowers to the Turner family.