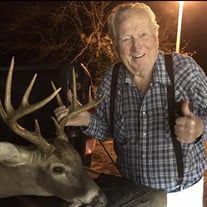 Thomas J. (Mac) McAlpin, better known as “Grandaddy” age 88, of Tallahassee, passed away in the early morning hours on Wednesday, September 16, 2020, while surrounded by those he loved. A son of the late Judson Barney and Mary Lou “Molly” Ferrell McAlpin, he was born in Greensboro, Florida on February 4, 1932. He is also preceded in death by his wife of 57 years, Ethel Newton McAlpin, as well as ten siblings. He is survived by his children: Ray D. McDonald (Anita), Patsy C. Stokes (Curtis, deceased), Nina K. Diamond, Joy Brady (Richard Poppell) and T. R. McDonald (Judy) all of Tallahassee; sister, Ettie Mae Wheeler; 12 grandchildren (four of whom he raised as his own: Kent, Kenneth, Jeffery, and Jason Grantham); 16 great-grandchildren; 13 great-great-grandchildren; and numerous nieces and nephews. After faithfully serving his country in the United States Army, Mac faithfully served his community in law enforcement for the remainder of his career. Mac spent 25 years with the Tallahassee Police Department - working as an officer in the downtown area, joining the canine training team and earning the rank of Sergeant. Following his retirement from TPD, Mac spent 13 years with the Leon County Sheriff’s Department - serving as a Circuit Court Bailiff and again earning the rank of Sergeant, before retiring. Mac was of the Protestant faith, and a member of the Masons and the Moose Club. His hobbies were hunting and fishing. Mac will be remembered for the life-long sacrifices that he made for others. Mac was a man that never met a stranger, a man who loved his family and a man who thoroughly enjoyed all of his family gatherings. “Granddaddy Mac” looked forward to and especially enjoyed his famous Family Fish Fry - which was held yearly, come rain or shine! It is a tradition that will be carried on in his memory. A graveside service for Mac will be held at Tallahassee Memory Gardens on Saturday, September 19, 2020 at 2:00 P.M. In lieu of flowers, the family asks for donations to Big Bend Hospice, 1723 Mahan Center Blvd Tallahassee, FL 32308 bigbendhospice.charityproud.org/donate. The online guestbook can be found at www.abbeyfh.com.

Thomas J. (Mac) McAlpin, better known as &#8220;Grandaddy&#8221; age 88, of Tallahassee, passed away in the early morning hours on Wednesday, September 16, 2020, while surrounded by those he loved. A son of the late Judson Barney and Mary Lou... View Obituary & Service Information

The family of Mr. Thomas J McAlpin created this Life Tributes page to make it easy to share your memories.

Send flowers to the McAlpin family.