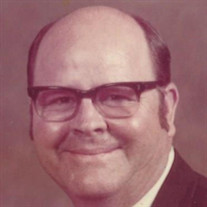 Tom Collinsworth, Jr., 91, of Crawfordville, formerly of Tallahassee, passed away on Monday, June 22, 2020, while surrounded by his family. Born in Westville, Florida on June 17, 1929, he was a son of the late Tommy and Gurthey Lee Reynolds Collinsworth. He is also preceded in death by his wife of 65 years, Sara Elizabeth Grice Collinsworth; son, Jed Collinsworth; granddaughter, Rachel Cooper; and his siblings, Infant Son Collinsworth, Marie Crowder, Maude Reeves, Mildred Jackson, Gladys Rammer and Ted Collinsworth. Surviving are his children, Paula Collinsworth Joyner (husband, Jim), Paulene Cooper (husband, Bryan) and Jan Crosby Green; grandchildren, Victoria Cooper and Priscilla Burdeshaw; great-grandchildren, Travis Levi Cooper, Noah Paul Cooper, Levi LeRae Burdeshaw and Ripley LeRae Downing. Numerous nieces, nephews and cousins also survive. He served in the US Army from October 12, 1948 until June 2, 1952, serving during the Korean Conflict. Following his honorable discharge, he worked from June 9, 1954 until September 9, 1994 at Centel Telephone Company. A member of Seminole Baptist Church, he was a Deacon and Sunday School Teacher, was very musically talented and when his children were younger, traveled with them to their softball games and tournaments. The funeral is 2:00 PM, Saturday, June 27, 2020, at Abbey Funeral Home, with the family receiving friends an hour prior to the funeral. Interment will be at Tallahassee Memory Gardens. In keeping with current Covid-19 guidelines, social distancing is recommended. The funeral service can be viewed live and online condolences may be expressed to the family at www.abbeyfh.com. In lieu of flowers, memorial donations may be made to Covenant Hospice.

Tom Collinsworth, Jr., 91, of Crawfordville, formerly of Tallahassee, passed away on Monday, June 22, 2020, while surrounded by his family. Born in Westville, Florida on June 17, 1929, he was a son of the late Tommy and Gurthey Lee Reynolds... View Obituary & Service Information

The family of Mr. Tom Collinsworth Jr. created this Life Tributes page to make it easy to share your memories.

Send flowers to the Collinsworth family.