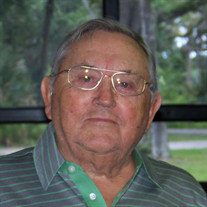 William A. Bufkin, 92, of Tallahassee, passed away on September 19, 2017. A son of the late Joseph Ernest and Fannie Everett Bufkin, he was born on January 31, 1925, in Delta, City, Mississippi. He is also preceded in death by four siblings, and stepson, Charles Palmer, and step-granddaughter, Megan Harpster. He served in the US Air Force during World War II and was retired from the insurance business. He was a talented woodworker and excellent cook. He was a great story teller, sharing his life experiences, with his friends and family. He would befriend anyone with his personality and he knew no strangers. Bill was raised in Delta City, a small rural town. He grew up in the depression as a child. His family raised and tended their farm animals, grew their garden, and worked hard together. He told stories of watching the radio, one light bulb per room, and heating water on the stove. He loved his mother’s country cooking, and talked of his father’s love for fishing and hard work directing the Stark County Road Department. As a teenager and young man he worked with his father grading roads, and working on equipment. He learned from his father’s work ethic, and it stayed with him for life. Having an entrepreneur’s spirit as a young man, he started his own bait business with a friend. They caught their own bait, kept it in aeriated tanks and sold it to the fishermen coming from Jackson to fish the Mississippi River and tributaries. He said it was good money, but the work was hard work. Along with his brothers he served in WWII. He was an aircraft mechanic, and was promoted to crew chief. He continued this trade through the fifties in civil service and the private sector, working hard to support his family. The weekends were a great time, cooking, grilling, spending time with friends and extended family. He took time away from his instilled work ethic to relax, enjoy life, and appreciate its blessings. In 1961, he moved his family to Tallahassee, starting a new career in the insurance business. His gift of gab and likeable demeanor helped him succeed, and also helped lead others to success. He retired from the insurance business in his early sixties, and continued to work part time several more years in the furniture business. His love for interacting with people would not let him sit around. He loved to have coffee and breakfast with his buddies. Working part time gave him the chance to travel with his wife Arla. They traveled extensively, taking the back roads, stopping in the small towns, looking for the local restaurants and Mom and Pop shops. They both enjoyed cooking, and cooked together. He love to cook soups, and he made the world’s best cornbread. They were in love and relished this time together. Bill was always involved in home projects. He built several additions on his and Arla’s home, and almost always had some sort of home project going on. He had a long time interest in wood working, so he built himself a shop. He spent many hours piddling, designing, and creating. He became an excellent lathe turner, and built many beautiful furniture pieces. He continued this passion through his eighties, experimenting and creating beautiful pieces. He was able to see things in old pieces of wood and through his creative vision alter them into artwork. He sold a few pieces, but mostly gave them to people he loved. Bill was always finding new interests to stimulate his mind. He had great passion for learning, getting all he could out of life. He became proficient with computers and almost every day had a new interest or question to explore online. Probably his most endearing attribute was his love for his wife Arla. He did his best to be a kind, loving, compassionate and considerate husband. He spent his last few years as her caretaker when she was diagnosed with Alzheimer’s. He gave his care and love, with joy. He is survived by his wife, Arla L. Bufkin; sons, Joe (Maryellen) Bufkin, Donald (Wendy) Bufkin; stepsons, Dean Palmer, Andy (Tay) Faircloth; grandchildren, Ryan Bufkin, Philip Bufkin, Lucas (Caitlyn) Bufkin, Hunter (Cristine) Bufkin, Megan (Eric) Matticola, Drew Faircloth; great-grandchildren, Marilynn Stege, Timothy Stege, as well as a great-granddaughter, Maggie Ann Bufkin, on the way. The visitation will begin at 10:00 AM, Saturday, September 23, 2017, at Abbey Funeral Home, with a graveside service to follow at 11:00 AM, at Tallahassee Memory Gardens. In lieu of flowers, please make memorial donations may be made to the Alzheimer’s Project, alzheimersproject.org, 301 East Tharpe St., Tallahassee, FL 32303. Online condolences may be expressed at www.abbeyfh.com.

William A. Bufkin, 92, of Tallahassee, passed away on September 19, 2017. A son of the late Joseph Ernest and Fannie Everett Bufkin, he was born on January 31, 1925, in Delta, City, Mississippi. He is also preceded in death by four siblings,... View Obituary & Service Information

The family of Mr. William Albert Bufkin created this Life Tributes page to make it easy to share your memories.

William A. Bufkin, 92, of Tallahassee, passed away on September...

Send flowers to the Bufkin family.