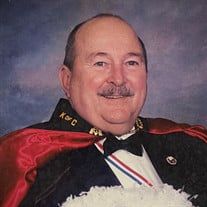 William James (Bill) McCarron Jr. passed away peacefully at the age of 79 on March 7, 2022 in Tallahassee, Florida. Bill was born on October 13, 1942 in Waterville, Maine to William James McCarron and Pauline Lillian (Sterling) McCarron. A devout Catholic, he was baptized, received his First Communion and was Confirmed at Sacred Heart Church in Waterville, Maine. Bill is survived by four siblings: Shirley Ashmore of Tallahassee, FL, Deven (wife Suz) McCarron of Johns Creek, GA, Susan Frye of Phoenix, AZ, and John (wife Mary) McCarron of Roseville, CA, by 9 nieces and nephews: Erin Young, Carrie Barnes, Christopher Ashmore, Sean McCarron, Kelsey McCarron, Robin Barnes, Katherine McCarron, Christopher McCarron and Ella McCarron, by 9 grand nieces and nephews and by a Godchild Lance Johnson. Bill attended school in Waterville and Skowhegan, ME before graduating from high school in Orlando, FL from Colonial High School. He attended Florida State University earning both Bachelor of Arts and Master of Arts degrees. Bill received a commission in the Air Force in 1965 where he served until 1971 earning the rank of Captain. He served in Viet Nam from November 1967 to December 1968. He was a member of the Air Force Association, the Caribou Veterans Association and the American Legion where he served as Commander of Post 63 in Ellsworth, ME for three years. While living in Ellsworth, he also served as the Chairman of the Ellsworth Board of Assessment for 20 years as well as the Chairman of the Homeless Shelter Committee. From 1971 until 1992, Bill ran The Pizza Place Restaurant in Ellsworth with his sister Shirley. He also worked in local real estate from 1987-1995 with Coldwell Banker and served as the President of the Hancock-Washington Counties Board of Realtors and Regional Vice-President of the Maine Board of Realtors. In 1995, Bill relocated to Anchorage, AK where he worked for Alaska Sales and Service in several capacities including salesman, sales manager and finance manager. He retired on Saint Patrick’s Day in 2009. He was a member of the Senior Activities Center in Anchorage and the American Contract Bridge League. He was a member of St Elizabeth Ann Seton Catholic Church in Anchorage where he served as a Sacristan, Usher, Lector and Eucharistic Minister. He was a member of the St Paul Miki Council of the Knight’s of Columbus and served three terms as Grand Knight. He was also a long term member of the Northwestern Lieutenancy of the USA in the Equestris Ordo Sancti Sepulchri , the Equestrian Order of the Holy Sepulcher. In 2011, he relocated to Tallahassee, FL where he spent time with family and continued playing contract bridge achieving the level of Life Master. Bill’s funeral will be held at Blessed Sacrament Catholic Church in Tallahassee on March 18, 2022 at 10:30 A.M and will be lived streamed and archived. He will later be interred in his final resting place in St Francis Cemetery in Waterville, ME. In lieu of flowers, the family suggests donations to the American Heart Association.

William James (Bill) McCarron Jr. passed away peacefully at the age of 79 on March 7, 2022 in Tallahassee, Florida. Bill was born on October 13, 1942 in Waterville, Maine to William James McCarron and Pauline Lillian (Sterling) McCarron. A... View Obituary & Service Information

The family of William James McCarron Jr. created this Life Tributes page to make it easy to share your memories.

William James (Bill) McCarron Jr. passed away peacefully at the...

Send flowers to the McCarron family.