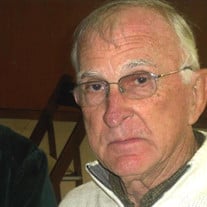 Surrounded by his loving family, William James Meusch, (lovingly known as “Bill”) 81 years of age, and a longtime resident of Tallahassee, peacefully entered the Gates of Heaven on January 28, 2017. Bill was the son of the Henry William Meusch and Lottie Leola Newman Meusch, he was born June 21, 1935, in Overland, Missouri. Bill graduated from Houston Missouri High School; received his Bachelor of Arts degree in Industrial Arts from SMSU in Springfield Missouri and received his Master of Education degree from the University of Missouri Columbia. Bill served his country in the US Navy, participating in several expeditions including the 1954-1955 US Navy Scientific USS Atka Icebreaker Expedition to the South Pole and traveled throughout the world, including the North Pole. Following service to his country, he became an educator teaching in the Missouri public education system and was employed by and retired from the Federal Correctional Institution in Tallahassee Florida. After retirement Bill was a literacy volunteer, actively involved in AmeriCorps contributing to the reading skills of many young children. He was a 32nd degree Scottish Rite Mason, enjoyed golfing, fishing, camping, canoeing and quail hunting. He was a loving husband, father, grandfather, brother and friend. His biggest love was spending time with his family and going to the beach. Bill was preceded in death by his parents and by his niece, Charlotte Ann Shelton King. Survivors include his wife of 52 years, Evelyn C. Meusch; children, Jennifer Meusch and Michael Meusch; grandson, Caleb Alexander Meusch, and his mother, Stella Meusch; siblings, Margaret Meusch Shelton, Lawrence Meusch and his wife Sharon, Mary Meusch Bailey and her husband Bill; as well as numerous nieces, nephews, great-nieces and great-nephews. A service to honor and celebrate his life is 11:00 AM, Friday, February 3, 2017, at Abbey Funeral Home. Inurnment will follow at Tallahassee National Cemetery. In lieu of flowers, donations may be made to a charity of your choice. Online condolences may be expressed at www.abbeyfh.com.

Surrounded by his loving family, William James Meusch, (lovingly known as &#8220;Bill&#8221;) 81 years of age, and a longtime resident of Tallahassee, peacefully entered the Gates of Heaven on January 28, 2017. Bill was the son of the Henry... View Obituary & Service Information

The family of Mr. William James Meusch created this Life Tributes page to make it easy to share your memories.

Send flowers to the Meusch family.