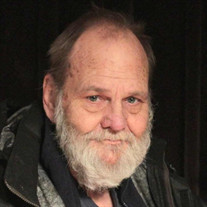 William Edward Tiley, II “Ed”, age 69, died May 15, 2021, at Tallahassee Memorial Hospital surrounded by love. He was born in Washington, D.C. on August 14, 1951, to Bill and Melva Tiley, who precede him in death. Ed was the oldest of three children, which include his brother Raymond "Ray" (deceased) and his sister Teresa "Terri". Ed served in the U.S. Army, and was stationed in Ethiopia for the majority of service before finishing his military career at Fort Detrick in Frederick Maryland. This is where he met his future wife and mother of his four children, Marylou. Ed and his family moved to Tallahassee in the mid 80's. Family vacations and frequent work trips to St. George Island seeded a deep love for Franklin County and the Forgotten Coast. Once his children were older and out of the house Ed relocated to Apalachicola. You could find him many nights with his beloved Lucky Dogg on the porch of the Gibson. Creativity would define his professional career, personal interests and hobbies. Ed was an inherent entrepreneur. He had an expansive resume including computer software design and diagnostics, web design, writing, publishing, photography and performing arts. He was also a published author of over 20 books, countless news articles, websites and blogs. Ever the thespian, Ed enjoyed theater and film. He was involved with the Florida State University Film School, the Mickee Faust Club of performing arts in Tallahassee and the Panhandle Players Community Theater group in Apalachicola. Photography was perhaps his greatest passion. At the time of his death Ed was working on a massive showcase with a collection of photos spanning 50 years of his life. He was also holding virtual classes once or twice a week for his grandchildren, ages 9 and 11, who were homeschooled during the COVID pandemic. Most of Grandpa’s Literature and English lessons were entwined with anecdotes from his youth. When his grandchildren were asked to recall their favorite of these stories their responses were: the time Grandpa’s mother stormed into school to confront a teacher who was forcing him to write with his right hand instead of his left; and when Grandpa and a friend switched out all of the regular light bulbs in the barrack bathroom for flash bulbs used in cameras, then hid in one of the stalls waiting for someone to come in. Memories that they will cherish forever. Ed is survived by his four children, Wil Tiley, Cory Tiley, Amara Boldridge (John III) and Laurel Tiley; his two grandchildren, Brooke Boldridge and John Boldridge IV; and his two canine fur babies, Chili Dogg and Sadie. A celebration of life will be held on his 70th birthday, Saturday August 14th at a time and place to be determined. Memories and condolences to Mr. Tiley’s family may be left at www.abbeyfh.com.

The family of Mr. William Edward TIley II created this Life Tributes page to make it easy to share your memories.

Send flowers to the TIley family.