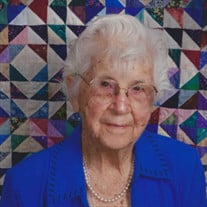 Ms. Willie Belle Bell, age 101 years old, of Tallahassee, Florida, died on December 9, 2019. Willie Bell was the oldest of eight children of John and Nora Adams of Glendale, Florida and was born in Walton County. In 1935, she attended Florida State College for Women in Tallahassee and majored in Home Economics. In 1938, she married Darius Wilborn Bell, Sr., of Glendale, Florida. If our nation gave accommodations for spouses during World War II, then Willie Bell would be one of many courageous women who cared for children, families and communities while their husbands served in war. As one of those brave women she cared for three young children, a garden, a cow and chickens; she helped her parents and his parents; and she had a part time job. Still she exchanged daily letters with Darius to extend love and hope during those difficult times. She was an accomplished seamstress who began sewing for interior designers in 1946. This eventually led to her love for quilting. She shared that love with many by donating quilts to Big Bend Hospice, sewing blankets for premature babies and teaching others how to quilt. She attended Faith Presbyterian Church in Tallahassee, Florida. Willie Bell is preceded in death by her husband of 54 years, Darius Wilborn Bell, Sr.; her brothers, Elwood Adams, Dewitt Adams and John L. Adams; her sisters, Vera Mae Obrien, Dorothy Mooney, Coreen Brackins and Jewel Parker; her sons-in-law, Willi Gutsch, Daniel Griswald; her daughter-in-law, Elizabeth Jane Bell; and her great-grandson, Andrew Morrow. Willie Bell is survived by five daughters, Willie Lou Gutsch (Jim Pratt partner), Mary Frances Carter (James), Susan Marie Griswald of Tallahassee, Lillian Ann Wise (Jack) of Glen Carbon, Illinois and Lisa Bell Highsmith (Greg) of Libertyville, Illinois; one son, D.W. Bell Jr. (Ann) of Tallahassee; four sisters-in-law, Pauline Adams, Coreen Adams, Mildred Rodgers and Doris Bell; 16 grandchildren, 27 great-grandchildren, 6 great-great-grandchildren; and many nieces and nephews. Willie Bell was a Christian all her life and she believed in staying busy, thinking positive, speaking kind to others, and staying physically active. She was a kind and generous person who was always there for her family and friends. She will be dearly missed and will live forever in the hearts of all who love her. Memorial services will be held at Abbey Funeral Home and Tallahassee Memory Gardens, 4037 North Monroe Street, Tallahassee, Florida, 32303 on December 26, 2019 at 2 pm Eastern. The family will receive friends immediately following the service. In lieu of flowers please consider a donation to Big Bend Hospice of Tallahassee, Florida at www.bigbendhospice.org. Interment will be held at a later date. The Bell family extends our heartfelt gratitude to Willie Bell’s devoted caregivers and everyone from Big Bend Hospice who helped her on her journey home to Jesus. Online condolences may be expressed at www.abbeyfh.com.

Ms. Willie Belle Bell, age 101 years old, of Tallahassee, Florida, died on December 9, 2019. Willie Bell was the oldest of eight children of John and Nora Adams of Glendale, Florida and was born in Walton County. In 1935, she attended Florida... View Obituary & Service Information

The family of Mrs. Willie Belle Bell created this Life Tributes page to make it easy to share your memories.

Send flowers to the Bell family.