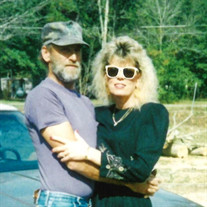 With profound sadness, the family of Willie Dairrell Toole would like to announce that on May 16, 2021, Mr. Toole, loving father and granddaddy gained his heavenly wings and joined his beloved wife, Mrs. Faye Marie Toole. Dairrell, as everyone called him, was indeed a true family man. His earlier years were filled with numerous stories about fishing and hunting, such as letting loose his dog, Pretty Girl, and within seven minutes a deer was killed. Some of his most enjoyable times were spent with his granddaughter, Savanna; showing Savanna some of his most favorite old movies and talking about good old politics. His favorite food was seafood, which of course was cooked by his wife, Ms. Faye. He and Savanna would frequently visit the Seineyard, which was one of his favorite restaurants. Mr. Toole was a gracious man, always trying to get the kids to take something when they came by and would even call them to take something when they didn't come by. He would spend his very last penny on his family just to satisfy their needs over his own. The fond memories of his humor brought out many laughs. One of Willie’s proudest accomplishments was choosing to be his grandson Dalton’s father rather than being his grandfather. To him Dalton was always his son. When his loving wife died, he was a lost soul. He was never able to put the pieces back together, but he continued to go on for his children and grandchildren, making the best of his days with a broken heart. As he finds peace joining his wife, Faye; parents, Grace and Charlie; granddaughter, Hali and other loved ones preceding him, let us rejoice in what we know, love and shared with him, according to the years God graced us with. Mr. Toole bids farewell to many broken hearts, including his son, William Toole; daughter, Felicia (Shane) Rivenbark; son, Dalton Baker; granddaughter, Savanna Rivenbark and step-daughter, Lauren Raker. At this time, no formal services are planned. He will be inurned at Tallahassee Memory Gardens. Online condolences may be expressed at www.abbeyfh.com.

With profound sadness, the family of Willie Dairrell Toole would like to announce that on May 16, 2021, Mr. Toole, loving father and granddaddy gained his heavenly wings and joined his beloved wife, Mrs. Faye Marie Toole. Dairrell, as everyone... View Obituary & Service Information

The family of Mr. Willie Dairrell Toole created this Life Tributes page to make it easy to share your memories.

With profound sadness, the family of Willie Dairrell Toole would...

Send flowers to the Toole family.