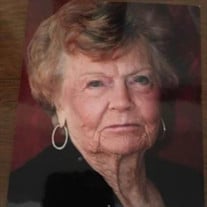 It is with a broken heart that I announce our mother, the gracious Annie Lois Pitts Hanna, went to Our Heavenly Father’s Home early on Christmas morning December 25, 2020. She was 100 years, six months and three days old. She has joined in heaven her husband, Burrell Jefferson Hanna; her mother and father, Mallie Lou Chancey Pitts and Benjamin Shason Pitts; her three brothers, Deroy Pitts who died at 2 years old in 1918 during the Spanish Flu epidemic (pneumonia), Mallie B. Pitts who died at 20 years old June 8, 1944 in Normandy, France, two days after D Day and is interred in the Normandy France Cemetery and Thural Maxon Pitts who died at age 44 in Tallahassee, Florida. Thural died exactly 45 years to the date (December 25, 1975) of mother’s passing into heaven. She also has two deceased sisters, Laler Belle Pitts Bush, of Bonifay, Florida and Lillie Mae Pitts Taylor, or Fort Walton Beach, Florida. My mother was a proud mother of three surviving children; one daughter, Mary Juanita Hanna LeCroy and son-in-love, Charles Edward LeCroy; two sons, Victor Burrell Hanna and Doyle Maxon Hanna. She has been the matriarch of our family and has guided us through thick and thin through the years. She had one granddaughter, Marcia Olivia McClain Boynton (deceased); her wonderful grandson-in-love, James Alrey Boynton; two great-grandchildren, Jamie Michelle Boynton and Jeremy Michael Boynton; and granddaughter-in-love, Amanda Elizabeth Yount Boynton; three great-great-grandchildren, James William Tipton, Jaxson Tilman Boynton and Jamessen Alrey Boynton. Two sisters, Louise Pitts Williams, of Tallahassee and Iris Jean Pitts Brannon of Panama City, also survive, as well as many nieces, nephews, friends and her Beta Sigma Phi Sorority Sisters. She loved her family dearly. We are already missing her. She became a nurse’s aide at age 18 and worked at Florida State Hospital. While her husband served during World War II in the North Africa Campaign in Egypt, she became a certified welder and helped manufacture Liberty ships for the war. She finally retired with 31 years of service from the Florida Controller’s Office as Head Cashier for the State of Florida. She was a very active member for 36 years at the American Legion, filling various roles, was a charter member of the Daughters of the Nile, the Daughters of the American Revolution, Women of the Moose, Beta Sigma Phi Sorority, an Auxiliary Member of Tallahassee Memorial Hospital and enjoyed traveling with the Callaway Association. She also loved spending time with her family. Visitation is from 4:00 until 6:00 PM, Sunday, January 3, 2021, at Abbey Funeral Home. Funeral services are 2:00 PM, Monday, January 4, 2021, also at Abbey Funeral Home, with interment at Tallahassee Memory Gardens. Face masks and social distancing are required. The online guestbook and live stream service can be found at www.abbeyfh.com.

It is with a broken heart that I announce our mother, the gracious Annie Lois Pitts Hanna, went to Our Heavenly Father&#8217;s Home early on Christmas morning December 25, 2020. She was 100 years, six months and three days old. She has joined... View Obituary & Service Information

The family of Mrs. Annie Lois Hanna created this Life Tributes page to make it easy to share your memories.

It is with a broken heart that I announce our mother, the gracious...

Send flowers to the Hanna family.